Last Friday evening around midnight, after spending two weeks in China, I arrived back home in Phnom Penh. After a long trip, it was good to be home. More about China in a few moments.

On Saturday, during our regular soul-winning time in Phnom Penh, Man and I had the opportunity to share the Gospel with Sophek and her mother Chanthy. We also had the chance to share the Gospel with two deaf sisters as one of the sisters grandson did the interpreting. They were attentive. Just not sure how much they understood. Lord willing, Grace Ortiz (who works with our deaf folks) will be able to go by and visit them and give them a clear presentation of the Gospel! 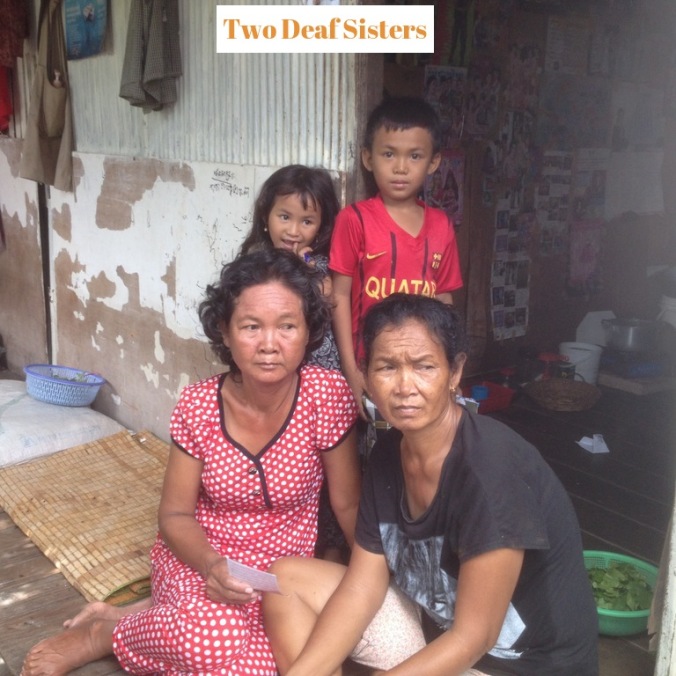 PLEASE PRAY THAT ALL FOUR OF THESE LADIES WILL HAVE AN UNDERSTANDING OF THE GOSPEL AND BE SAVED!

Later on Saturday afternoon, during the Men’s Prayer Meeting, I got word that Yay Loan trusted Christ. Many have shared the Gospel with her over the past few months, including Vannak and me a few weeks ago. I requested prayer for her in one of our most recent updates. Thank you for praying! A couple of our faithful Cham men went by, as they do on a weekly basis, and were privileged to see her trust Christ. 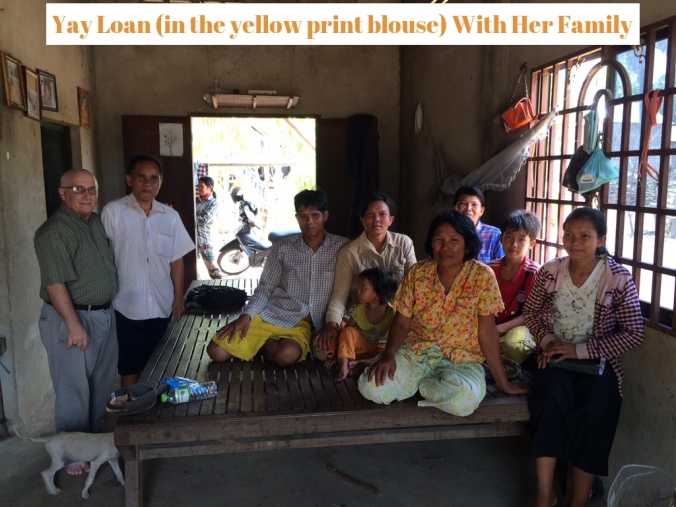 On Sunday, after a great service that was jam-packed with people, including many new visitors, we went soul-winning in Steung Mean Chey. Yay (grandma) Nuen Yen (77 years old) trusted Christ after Vannak and I shared the Gospel with her for nearly an hour and a half. Unlike most Khmer folks, she was fairly familiar with the Gospel. Right after leaving her we shared the Gospel with a 25-year old young man who had no clue who Jesus is, what Jesus did, nor why he died and rose again. He had no idea what sin was and had never heard of heaven or hell!

On Monday, during my discipleship with four of our Cham men, one of them shared a great blessing. He said that Sok and his wife have been faithfully attending services and even came to the Marriage Class Saturday evening with Brother Dave Board. Their 35-year old daughter Chon Ly attended church service for the first time this past Sunday. About four weeks ago Vannak and I had the privilege to lead all three of them to Christ. Thankful for San and the many others who paved the way for their making a decision to trust Christ! 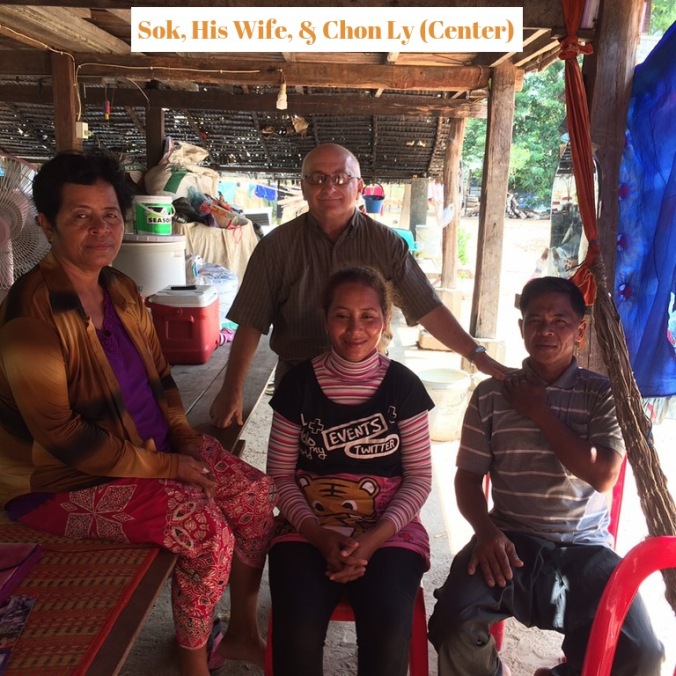 PLEASE PRAY FOR THEIR SPIRITUAL GROWTH!

My 14 days in China was blessed to say the least. Of course, in our last update I filled you in on the Missions’ Conference and the tremendous blessing it was. I had the opportunity to preach five times for the conference and we had two great Question/Answer sessions. In addition, during that first week I had the privilege to preach for a new house church in the same city.

PLEASE PRAY THAT THE SEEDS OF GOD’S WORD SOWN THAT WEEK WILL BRING FORTH FRUIT!

The last seven days were spent in two cities up north. During this time, in which I met up with some folks from our home/sending church (most of them my brother, Pastor Joe’s children), we had the opportunity to talk to four different missionaries, visit one of their church services, and spent time at a university with some of the staff talking about the possibility of enrolling in their language school.

PLEASE PRAY THAT THIS TRIP WILL GIVE GREATER CLARITY TO PACIFIC BAPTIST CHURCH CONCERNING THE POTENTIAL OF SENDING A TEAM SOMETIME IN THE FUTURE!

Concerning the great need in China I thought I would share a few statistics with you:

Think about this for a moment: If you take just the cities listed above you would have nearly 115 million people. And to our knowledge, if you’re lucky, you might find 20 independent Baptist churches. That would be one church for every 5.5 million people!

The church in the southern part of the country where I preached the Missions’ Conference gave me a few gifts including a small banner that says in old traditional Chinese “Bless China” and a picture of the map of China that says, “Pray for China.” 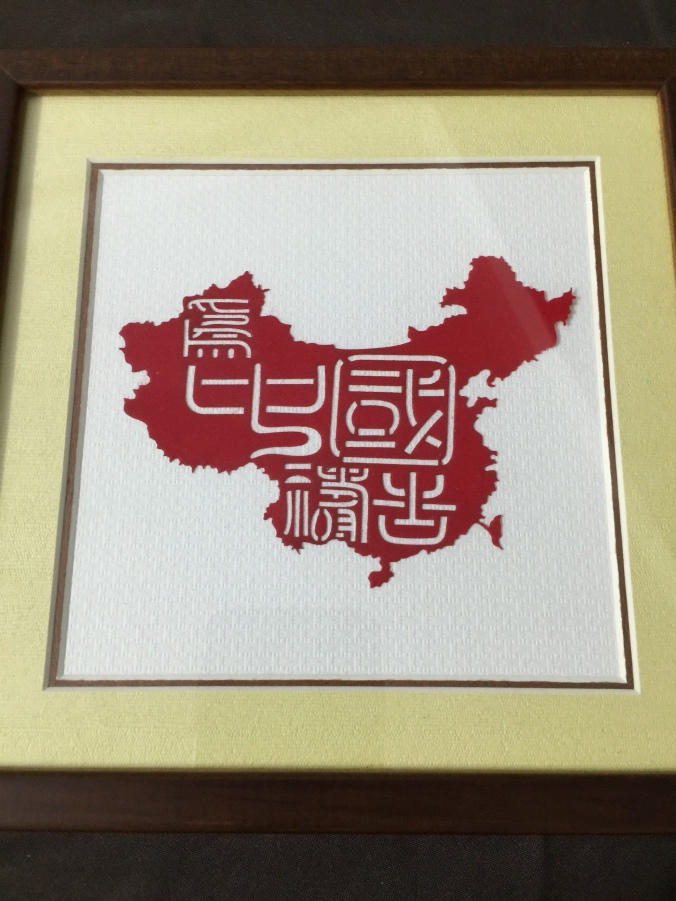 While I was in China I received this precious email from Barbara Tinsman. Her and her husband are members of one of my supporting churches.

KloeJoy Xiaojing is now 6 years old, we were blessed to be able to adopt her from China and bring her into our family in May 2011. Her Kindergarten class has been talking about missionaries and KloeJoy was so excited to tell her whole class that she knew a missionary! His name is Bro. Johnny and he is going to China and she is going to be a missionary and go to China to work with Bro. Johnny! We are so thankful that she has you as her idol!! Thank you for all you do!!!!

PLEASE PRAY FOR THE DEAR PEOPLE OF CHINA TO SEE THE LIGHT OF THE GOSPEL!

My wife, Sue, Michelle (more about her next update), and I once again want to thank you for your prayers and financial support. We couldn’t be here were it not for folks like you!

Peeking Through the 1040 Window